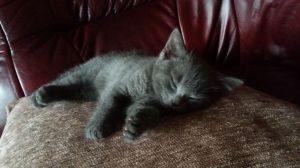 Billy and Teddy lay side by side, a ribbon of grey and black stripes, happily absorbing the sun’s rays, soft sparks of hope sighing through the window. Happiness ruled their hearts. Life was too good to be true. Dream dust settled in their chest, the residue of bliss lining their veins. For Billy and Teddy had found their perfect home.

Many cats dreamed of a feline paradise, a place where good food materialised without demand, where humans were kind, where real love existed. These cats sat stiff and cold in rescue centres, waiting for that one open-hearted visitor who would see them with tomorrow eyes and take them home. Or worse, they endured abuse at the hands of non-caring owners. But Billy and Teddy … they had struck gold.

Surely their future lay paved with unmutable golden glitter, petted purrs the music of their lives.

A strange humming tickled their ears. Billy scratched his head, as Teddy sat up, sleepy stupidity misting his eyes. An orange and blue light was leaking from under their owners’ television set, that strange slim box of bright colours that kept mum and dad transfixed, as if moving images were any substitute for enjoying a real life. But today, the strange box had something worth watching beneath it.

Together, Billy and Teddy performed a slow hunter’s dance towards the TV, senses alert as they scanned for danger. The light was brighter close up. It stunned their tired eyes. Slowly, gracefully they crouched closer. Then the light swallowed them with no remorse.

A tunnel of entrancing light engulfed Billy and Teddy. So bright, it was alive. Speeding along, doors passed them on either side, portals to magical rainbows of light beyond. Where did they lead? The dust of cat spells fell in their eyes, as the world turned in to a blurry bubble of white.

Falling, weightlessly, they landed as the tunnel disintegrated. Where were they? Their bewildered brains could not process what they saw.

Then the images came together: they were in a sitting-room, brown and green walls and a leather sofa that looked old. The only interesting detail was the television which was suspended in mid-air. An ordinary window looked out on a small garden laid to lawn; a larger window depicted an unlikely scene of snow-clad mountains in the sun.

The fattest feline they had ever seen entered the room, ginger and white and eyes glinting with inner knowing. “Hello, I’m Ambrose,” he slurred, in the mystic cat language that only they could understand.

Billy and Teddy stood erect, uncertainty and understanding battling within their brains.

“I summoned you through the energy lines of time. You travelled through a time travel loop.”

There was no answer to this madness, so Billy and Teddy remained silent, but still alert, tension in their quivering spines.

“I summoned you because only you can help. You are famous in cat history. But someone had to link our time chains together, and that turned out to be me. Ambrose, Head of Cat Healers United.”

“Healers?” mumbled Teddy. “But cats do that anyway. We don’t need a united body to represent us.”

“Of course, of course, in your time, you don’t. It is very different here in the future. The human race was attacked some time ago, and is still under constant attack or threat thereof. Aliens, beings from other worlds. Humans spent so much time creating horror films about ETs, and perhaps in so doing consciously created their future. Their destiny was dark and still is.”

Ambrose’s eyes shone with feline fanaticism. He was about to relate a wild tale to two unbelievers. But they would listen, they would learn.

“Aliens are attacking humans from the inside. It’s an airborne flu virus, designed to alter their DNA: ultimately, to change humans’ brains in to alien brains. This will vastly increase their intelligence, but will have a poisonous price. Aliens will use their new recruits to take over the Earth.” Ambrose paused for enigmatic effect.

“But there is good news. You are the future.” He paused again, grinning as only a cat can.

“Us?” Billy was bewildered.

“I am going to hand you a gift today, it is the secret of how to heal an infected human. You will then heal your own humans, giving them immunity before they are ever exposed to the future virus. They will pass their immunity to their children.”

“They don’t have a child!” cried Teddy.

“But they will, they will,” Ambrose assured them. “Yes, you are the future. You must pass on your healer skills, you must train other cats to be protectors. Between us all, cats will heal their human companions, and will – of course we will, us cats are powerful beings – we will save the world!”

He grinned once more.

“Really?” Billy was incredulous. How he wished he was still enjoying his nap in the sun.

“Yes, really. YOU are the future. I have chosen you to be the first Cat Guardians.”

He rubbed his forehead against each of them in turn. A gentle heat danced in their brains. Starts fluttered in their hearts, and their paws were hot.

“You are now attuned,” proclaimed Ambrose. “Good luck, my friends.”

He arched his back, and the mysterious tunnel of light appeared behind them. “Go now! Go and make our better future commence with no delay! May all the cat gods be with you!”

This time, the tunnel was even brighter than before, hurting their eyes. Secret doors rushed past. “Will we go through one of the doors?” whispered Teddy. “I’m sure it’s not really allowed,” countered Billy, but his curiosity was on fire.

The next door was red with black stars. They stopped. Teddy closed his eyes and felt for the door, gently pushing it. An inviting screech tickled their ears as the door opened.

A pink paradise of fluffy cushions and rose quartz lamps confronted them. An enormous tiger slept in a large cat bed of red and black stripes. Slowly it opened an eye.

“Oh, I have been disturbed,” it meowed in a bored monotone. “By two very harmless looking domestic felines. The type who can’t fend for themselves, who rely on HUMANS. Am I right?”

“I am Evelina, the Queen of Tigers. I look after the souls of our poor children on Earth, the true kings of the Cat World. Why are you in this time tunnel? Has some deluded human’s pet from the future summoned you for a mission? Don’t believe them, any of them. Just enjoy your pampered food on tap life while you have it.”

“We’re meant to save humankind from a future alien virus!” blurted out Billy.

“Of course, of course.” Evelina’s eyes sparkled, and her face grinned as only a cat’s can. “Have you been attuned to a cat healing system? Let me top it up with tiger power.”

Slowly and gracefully Evelina moved her handsome body. Fear did not cross Billy or Teddy’s mind as they beheld her beguiling beauty.

“Come here,” she commanded. Slowly she rubbed each of their foreheads in turn. Fire lit behind their eyes, and their hearts leaped in joy. “Welcome to tiger magic. This will help you in your mission.”

Billy and Teddy slowly retreated, and then were floating through the tunnel once more. It seemed longer this time. Slowly they did land, once more, in their own sitting-room. Never had they been so relieved to be home.

Daily life resumed, routine balm to their mystified minds. There were toys to chase, and trees to climb. Life was good again.

But soon, they knew, they should begin to practise their new healing skills. Destiny had caught them and there was no cupboard in which to hide.

Luck laced their path, as a forlorn soul arrived, I NEED HEALING written all over his feline face. A three month black and white kitten, homeless, on the run from unknown fears. There he was, shaking in their garden, HELP ME in telepathic code within his eyes.

Teddy called him Harry, but the Humans named him Danny. And so Operation Danny began.

They rubbed and rubbed around him, ribbons of grey and black fluffiness intertwined. Danny purred blissfully. All his tomorrows were lined up, waiting for a better future.

Billy and Teddy slept happy that night, on top of each other in their bed. They shared a dream of a future where they had vanquished an alien threat to humanity. Supercats, Billy and Teddy. It was a wonderful dream. In the morning, their hearts were full of hope.

Hope hung in the air as they ran downstairs to check on Danny. But that was when hope was slayed.

A tiger cub lay in Danny’s bed, sleeping peacefully as if all his yesterdays had decided on a new golden future.

A new day had dawned, as Billy and Teddy slept in the sun once more, problems and tiger cubs chased outside, and nothing to disturb them. So they dreamt of a better future, new days that, in their own time, would be forgotten. Only the sun remained, the memory of its warm kiss alive, always, in their hearts. Nothing else mattered. Time stopped, then began again on a different path. Life was too strange to be true. And still they slept, serenity ruling their hearts.