27 January 2013
Cat pens update: all well at the pens, the beautiful Trixie is gone to a new home, I wish her well. Sox has taken over as the Princess of the pens, photo below: she was desperate for cuddles today, she is a lovely cat. Tigger also looking for some affection, he is a gentle ginger giant. Lilly and Jasmine enjoying their turn in the outer corridor, and Jester full of beans. Local feral cat Aaron around for his breakfast.

Sophie gently stroked her new purchase: four beautiful crystals, little planets of poetry. Purring happily, Tessa thought so too. Her black and white coat glistened in sympathy, mirror to crystal light as she playfully pawed them. They are my toys too, her cheeky eyes confided.

Why did I never buy crystals before now? wondered Sophie. And where will I keep them?

Her new stones were citrine (shining yellow), leopardskin jasper (a stone with the markings of a tabby cat), snow quartz (pure white like the moon) and carnelian (an orange globe of fun).

She chose the kitchen window. That would do for now. Moonlight shone on the silent balls, little moons in the night.

In the morning, Sophie felt a draft coming from downstairs. As she descended to the kitchen, she was alarmed to find the window open! Her crystals were gone. There was no other sign of disturbance.

Tears erupted at the edge of her eyes, lava of regret. How could she be so stupid as to leave her precious crystals at the window!

Mina sat all alone in her large house, the vacant place on the settee so noticeable at night. She heard a scratching at her window. Curious, she was surprised to find a tortoiseshell cat on the window sill, yellow in the moonlight.

Mina let her in: it was too cold a night for a cat to be out. The cat rubbed around her, purring like a machine with no off switch. Mina was overjoyed.

Loneliness was vanquished. She spent the happiest evening playing with her new companion, who then slept at the foot of her bed.

Kitty was lost. She shivered in the cold night air, the wind ruffling her tabby fur. Her owners had moved house, and now she could not find her way home.

“Come with me.” A large tabby cat stood before, reminding her of her mother.

Meekly she followed. After traversing many streets, they were there: at her new house. “I will leave you here,” said the cat. “You are safe now.”

Kitty ran to the door and began scratching. Within minutes it opened, warm air greeting her like the paws of a mother cat.

The little boy turned over in bed, sleep eluding him as his brain brewed the day’s torment. A life as a bullied kid was one of constant threat, like living in a warzone in your heart.

He heard a scratching at his window. A white kitten looked in, eyes sparkling in the street light.

He laughed. Letting her in, she jumped in to his arms, licking his hair. They lay down in bed together, and the little boy slept as he had not done in weeks.

Tommy slept alone, his old body aching and fur on end. Once he had enjoyed feline companionship and playing with the family children. His feline friend was long gone, and the children grown up and far away. His mum and dad did not seem that interested in him anymore.

The cat flap opened. He opened his eyes. A ginger boy approached him, the colour of a golden sun. “You are alone no more,” said the cat softly, a feline voice in his head.

Together they slept, a warmth caressing his old bones.

In the morning, the ginger cat crept slowly away. Tommy turned over, the memory of comfort in his heart.

The next morning, the crystals were back on Sophie’s windowsill. But they had changed, they were no longer pebbles. Now, they were each shaped like a cat.

Sophie scratched her head. Who would steal her crystals and then mould them in to cat shapes? Mystery whipped up a wind in her mind.

Miles away in each direction, four souls woke up to a new happiness, a beautiful cat in the dust of a half remembered dream. A feline love can happen just once, a few precious moments in time … but it will last forever.

Sophie stroked the tiny cats, and her heart felt a feline love deep inside. Then Tessa demanded attention, and the moment was gone. But like all moments, it would last forever.

13 January 2013
Cat pens update: good to see Fergus gone to his new home, hopefully the owners have booked many hours of playtime in their diary! His pen now holds a stray (unneutered) boy called Jester, he is adorable and very affectionate – photo below. Trixie far more confident, and looking for a cuddle. Tigger also desperate for his cuddle, he is a very handsome – and very large – lad. Brian ventured out of his bed today, he is a beautiful longhaired boy but semi-feral, hopefully a country home for him will come forward soon. Lily and Jasmine lovely as ever, gorgeous girls.

8 January 2012
Great to see some cats at the pens have been rehomed. New boy Rudy is adorable, he kept jumping up and rubbing my chin, I think I have found a friend! Bruno alas is still desperate to escape, let’s hope someone gives him that opportunity very soon… 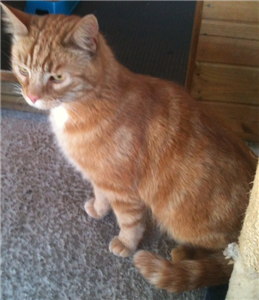 6 January 2013
Cat pens update – Molly off to a new home! New cats Lily and Jasmine, sisters (Lily long haired tabby, Jasmine short haired tabby and white), are lovely if a little nervous still. They only arrived yesterday as did Mitzi, a beautiful tortoisehell girl who was very subdued today. Harry full of beans, and Fergus enjoying the cat tunnels. Tigger desperate for a cuddle, but poor Brian still staying in bed.

2 January 2011
Cat pens update: The very timid new female cat Jo, from two weeks ago, has transformed in to a confident affectionate girl, even with a stuck up attitude to food – they know how to twist my arm to get something better!