The Christmas morning was chill. A sprinkling of snow wove a drunken tapestry across the lawn, while the coal fire stitched festive flair inside. Sophie sighed. The first Christmas in the new house.

Gazing out the window, a winter wonderland kissed her heart. Her dream garden, finally. Then she noticed them. The tiny paw prints on the lawn, heading towards the front door.

Opening the door, she gasped. A tiny light ginger kitten shivered before her, green eyes glowing with Christmas hope. She cuddled the purring but cold bundle in her arms, and then placed him tenderly by the fire. The kids were going to be ecstatic, Santa had certainly delivered this year!

The kitten slept by the fire all day, taking a break for some lunchtime turkey. Later, he played with them at after dinner boardgame time, chasing the counters around the board like a feline football player. The children – Tessa and Tom – laughed, enjoying the kitten more than their actual presents. “We can keep him, can’t we?”

“Well … he might have a home. We will have to advertise him.”

But the kitten was gone the next morning, vanished like a Christmas Cinderella that could not stay for Boxing Day. They searched everywhere. But he was gone.

Days went by, the children hoping to see the little boy again. But there was no sign.

A year passed. It was next Christmas. Sophie opened the front door to welcome the special day: and there he was. The kitten. Looking just the same. But how could he be?

She invited him in, a smile covering her disquiet. This could not be the same kitten, a crazy feline coincidence. But the children thought otherwise. “He’s come back!” they shrieked in delight. Their laughter extinguished her unease. He was a Christmas charm. Let’s just enjoy him! she thought.

They played kitten games all day. But on Boxing Day, he was gone.

Christmas Day came round again. Sophie marched to the front door in the morning, confident there would be no kitten there. But he was on the doorstep, shivering in the cold and regarding her with those imploring eyes.

So it became a Christmas tradition. They would spend their day with this kitten who never grew up, and then lose him again on Boxing Day. They told no one. Who would believe them, after all? 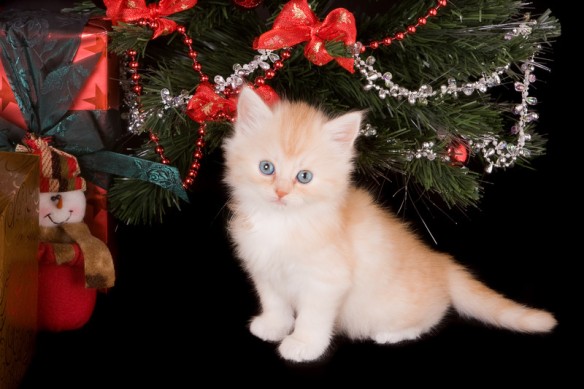 Years passed like dominoes falling in slow motion. When the children grew up, the kitten stopped coming. The first Christmas without him felt strange; Sophie repeatedly opened the front door, she searched the garden but Kitten Klaus, as they had named him, was not to be found.

Decades sped by like fields glimpsed from a car window, gone before they could be explored. Sophie was admitted to a nursing home at age 83, after suffering a minor stroke. When her children came to visit, she told them excitedly about the nursing home cat. “He is old but ginger. He reminds me of Kitten Klaus, but of course it can’t be him. He is a comfort to me, sometimes he sleeps on my bed.”

The months passed; at each visit, Sophie relayed to her children how much she enjoyed the ginger cat’s company. Then one day the dreaded phonecall came; Sophie had died suddenly but peacefully in her sleep.

On the way to the home, Tessa and Tom bought a present for the cat. He had, after all, given their mother such comfort. But when they arrived, the nurse looked confused. “We do not have a cat here.”

That night, Tessa slept with the tears fresh on her pillow. She woke to the sound of purring. But there was no cat there. As she fell asleep again, she dreamt of Kitten Klaus, and the family Christmases she used to enjoy. The next morning, a whisker fell to the floor as Tessa rose. But she did not see it.

A shadow walked across her garden and then was gone. Miles away, a little girl cried for her deceased ginger cat. Christmas snow had begun to fall. A ginger kitten appeared at the window, meowing to get in. Cindy opened the window and smiled. Her Christmas wish had come true. The kitten meowed and rubbed round her. She laughed in delight.

In another dimension, Sophie was at peace, as she rested with a ginger cat in her arms. She smiled in the world of dreams, a special place where kittens never grow up, where all Christmases are white and where children’s tears are firmly wiped away. Sophie continued to smile in the perfect world of everafter, as a little girl played with a kitten far below. The love of a cat never dies.

Cats have a lower social IQ than dogs but can solve more difficult cognitive problems when they feel like it.
from: www.buzzfeed.com/chelseamarshall/meows