It had been a busy day. Fatigue unfurling in his eyes, Michael drove slowly home, savouring the anticipation of a cool beer. The monotony of the country roads relaxed his mind, a path of predictability.

A shadow accosted his eye. Michael braked as a limping animal slowly edged across the road. Conscience cut in to his heart like a knife, and reluctantly he opened his door. A black and white cat shivered at the verge, pain shrieking from its green eyes.

Gently he enfolded the cat in his arms, and felt it turn rigid, pain paralysing its features. Setting the cat on the back seat, he quickly consulted his phone for the nearest 24 hour veterinary practice. There was an animal hospital only three miles away, a welcoming light in the night as he slowly approached. There was silence from the back seat.

Michael never found out the cat’s fate. He left her at the hospital, giving the receptionist his credit card details. Then his busy life took over, and he thought of the cat no more.

Two months later he suddenly remembered the animal, and for one second wondered how it was. As he drove home, sleep attacked his tired eyes. He fantasised about the cool beer awaiting him, lacing his throat with liquid ice.

A shadow hit his windshield, and green eyes tore in to his soul. Then it was gone. Abruptly braking, he sat for a few seconds in shock. That was when it happened.

A car appeared out of the low mist, spinning out of control in the road, cutting through the air like a madman’s knife. Then it stopped, a figure huddled over the wheel like a ghost.

It had missed him by inches. If he had not braked …

Approaching the car, he discovered the figure behind the wheel to be an auburn-haired woman, unconscious but breathing. Waiting for the ambulance, the eyes of the earlier creature tore in to his soul, a message of terror within.

This time he did follow up with the local hospital, and was pleased to discover that the woman, having suffered a mild heart attack, was none the less on the mend.

Now he could forget the incident: if it was not for the memory of those feline eyes. One day he would see them again, he was sure of it. And one day, somewhere in the fog of the future, there would be no happy ending.

So Michael drove home each night, the twists and turns of the country road reflecting his turmoil as he considered the frailty of life. Some days a cold beer awaited him at the end of the journey. But it could not appease the chill in his heart, or hide him from the waxing eyes of tomorrow.

Yes it is that time of year again – the local Cats Protection open day! Three hours of feline bliss, home bakes, cat toys, and the ever popular tombola. But the many kittens stole the show with their frolics and overall cute factor. My favourite however is the first cat pictured below: the dignified Daisy, a friendly girl who gave dainty head butts. 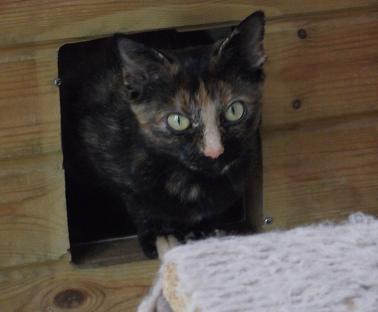